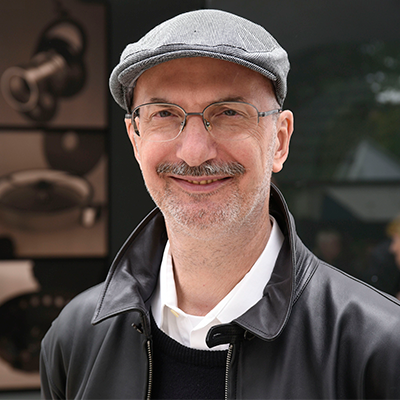 Tamás Waliczky is an animation and new media artist. He started out by creating animations at the age of nine. Then he worked as painter, illustrator and photographer. He began working with computers in 1983. He was artist-in-residence at the ZKM Institute for Visual Media in 1992, and subsequently a member of the Institute’s research staff (1993–1997) before taking up a guest professorship at the HBK Saar, Saarbrucken (1997–2002). The IAMAS in Gifu, Japan, has chosen Waliczky as artist-in-residence in 1998–99. From 2003 until 2005 he is professor at Fachhochschule Mainz. Between 2005 and 2010 he is at HBK Saar again, this time as full time professor. Since September 2010 he is professor at School of Creative Media, City University of Hong Kong.

Waliczky works together with his wife Anna Szepesi since the early eighties. Anna is usually the artistic adviser in most of his works.

His works won numerous international awards, including the Golden Nica of Prix Ars Electronica, Linz, was shown in several exhibitions worldwide, including the Biennial of Lyon, the ICC Gallery Tokyo, the Multimediale Karlsruhe, the Biennial of Seville or the Goethe Institut Hong Kong, and are in different public collections like the Centre Georges Pompidou (Paris) or the Ludwig Museum (Budapest).

Tamas Waliczky has been selected to represent Hungary at the Fifty-Eighth Venice Biennale, 2019.

As A New Media Artist, How Has my Attitude towards the Use of the Internet Changed since 1999?

I created several Net art pieces between 2001 and 2002. These artworks were realised to be distributed via the Internet. I intended to only present them online. This was the ‘Animation for the Internet’ series.

I launched my own website in 1999 and it still runs. In the beginning, it operated as a simple, text-based site then I started to upload image and video contents as well. The thought that it could function as my own TV channel through which I would be able to show my works to the international audience inspired me. In this early period, I shared complete animations and let anyone enjoy them.

In a short time, I deleted the animations since there was a risk that my works were illegally used. Thereafter I published only low-resolution details of my animations. However, I still thought that the internet was magnificent and at this time I realised several interactive animations that were created with Macromedia Director and could be played by using Shockwave.

I believed that the Internet was a new medium of communication and a chance to introduce my works independently of the galleries, directly to the audience. Furthermore, the viewers had the opportunity to react to the pieces as well. Some of these artworks were part of the Rhizome Artbase collection.

Since then everything has changed. Although, virtual exhibiting spaces and galleries still exist they did not take over the role of traditional institutions. Personally, I work with conventional galleries as well. Adobe bought the Macromedia Softwares and in 2019 stopped the development of the Shockwave player. For this reason, I am not able to publish and play my animations in their original format on my website anymore. Rhizome decided that artists should support the organization. Since I disagreed with their decision, our cooperation ended.

My latest new media series the Imaginary Cameras were printed on traditional materials. The museum-quality prints on excellent paper and high-resolution Duratrans films in professional lightboxes were exhibited in galleries and museums.