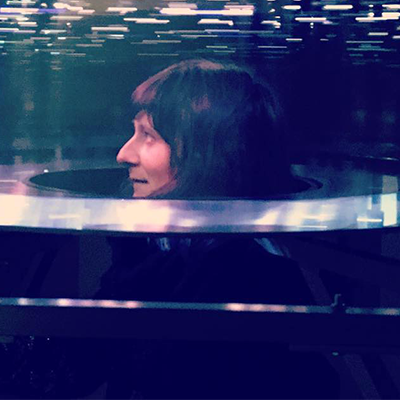 Nathalie Bachand is writer and independent curator. She is interested in the issues of digital technology and its conditions of emergence in contemporary art.

Previously in charge of development for ELEKTRA-BIAN (2006–2016), she initiated, created and directed the publication project Angles Digital Arts (2009).

In 2016, she co-curated with Chloé Grondeau the ADC/DAC exhibition by New York artist Phillip David Stearns, presented at Diagonale as part of the 3rd edition of BIAN. She was also curator of the group exhibition The Dead Web – La fin, presented at Eastern Bloc in the winter of 2017; the 32 exhibition project, featuring 50 artists, UN MILLION D’HORIZONS from the Accès culture network for the 375th anniversary of Montreal, which took place in the summer of 2017; and the interactive work Thresholds by Montreal artist Michel de Broin in the Âjagemô space of the Canada Council for the Arts in the winter of 2019. More recently, her exhibition The Dead Web – La fin was produced by Molior in Europe: at the Mirage Festival in Lyon in April 2019 and at the Mapping Festival in Geneva in May 2019.

Actively involved in the cultural field, she regularly writes on the visual and media arts, and sits on the Avatar Board of Directors in Quebec City. She is currently co-curator for the Espace [IM] Média 2019 festival of Sporobole – Centre en art actuel.

What we talk about when we talk about the end of the Internet, notably when that which is talking are artworks? How do artworks from different art practices – not only web-based ones – speak of this disruptive eventuality and from which perspectives? But also, how artworks that do not relate on the question of the Internet can enlighten it? Is this ventriloquist quality of the art a way to make sense of the past, the present and the future? How artworks from different time and different place may be part of a shared discussion around the idea of the end of the Internet?

The speculative idea of the end of the Internet and consequently of the Web is the concept behind The Dead Web – the End exhibition, with which this paper is dealing. Initially composed of Québec artists, the exhibition has now been enhanced by artworks from Swiss artists – following a diffusion at the Mapping Festival last May – and from Hungarian artists and artworks from the Ludwig Museum’s collection for the present iteration.