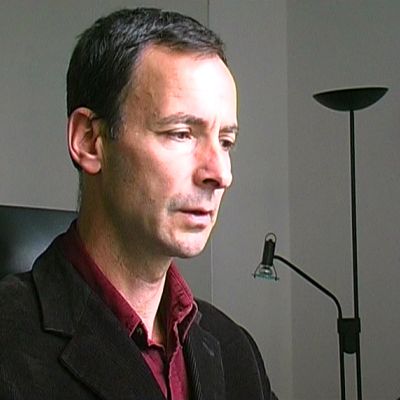 Having been academically trained as a historian (PhD) and classicist (Latin philology and Classical Archaeology) with an ongoing interest in cultural tempor(e)alities, Wolfgang Ernst grew into the emergent technology-oriented media studies and is Full Professor for Media Theories in the Institute for Musicology and Media Studies at Humboldt University in Berlin since 2003. His academic focus has been on archival theory and museology, before attending to media-technological matters. His current research covers media archaeology as method, theory of technical storage, technologies of cultural transmission, micro-temporal media aesthetics and their chronopoetic potentials, and sound analysis (“sonicity”) from a media-epistemological point of view.

With a Sense of Ending Already: The Ephemerality of Internet Art

The qualities of new media art are neither exclusively reducible to material, nor to its software tools. Rather, new media art is a process-based practice with limited duration, as it has been envisioned by the electro-acoustic and video works by the Fluxus art movement in the 1960s and 70s already, which has a conceptual sense of ending built-in already. Documenting dynamic media art (be it site-specific installations or Internet art) is one task; preserving and re-enacting the interactive experience is another, such as the “webrecorder” (provided by Rhizome, New York) as free software allows for. A gap opens between the phenomenal appeal and its intra-structural technical condition. Taking into account audience participation and (web-)site-specificity, it becomes clear that for processual media art works there is no such original state at any given moment from the phenomenological perspective. The technological conditions for such interactivity itself, though, on the contrary, are not allowed to change within the artwork from moment to moment, even if in-situ conditions mean that the installation must constantly adapt to new circumstances.

For dynamic media art preservation, the ephemeral phenomenal visitor or user experience is not the only cultural value worth to be preserved. While for the inaugural exhibition event, priority is on the affective experience and human-machine communication (“media art”), what becomes more interesting for future memory of past artistic research knowledge is the testimony of its technological ground (“medium art”) as implicit knowledge for which the interfacial, phenomenal appeal has been rather a symptom. Central for the preservation of Internet art is the algorithms and microprocessing electronic units which run digital media formats and compression – the real l’archive as precondition of media art action in terms of Foucault’s Archéologie de Savoir (1969). A radical museology of “new” media art reveals computing architecture from within instead of surface display. Here, the logic of enunciation in fact corresponds with mechanically implemented logics, to be expressed in algebraic formulas and program code. The notion of “logical preservation”, as it has been developed in documentary science[1], thereby extends to the media-active, archaeological preservation of a continuously representable techno-aesthetic past.

Media culture is not only challenged by the imminent and speedy obsolescence of artworks which are based on, or within, forms of the World Wide Web, but the Internet might end itself, in two ways: a) in terms of accessibility (the “archive”), with an increasing privatization and of the former “public domain” into commercial sectors[2], and b) in terms of its techno-logical infrastructure. The glass fibre cables (the physical “medium” of the Web) will crack, and the protocols be hacked. Will the Web be a “dead medium” (in Bruce Sterling’s sense) soon? Media archaeology is both a method of academic inquiry, and an aesthetics, to make users more familiar with such temporal “laws of media” and their museification. The anticipation of the end (such as the possibility of a collapse of the Web, and the imagination of a “web after-world”[3]) is no mere figure in the philosophy of history, or literary fiction, any more, but has become a current technological practice, ranging from the futurum exactum in the cybernetic sense (Norbert Wiener) to predictive coding in contemporary data analytics.

The main question “Will the Internet end soon?”, when understood in its temporal, rather than topological, spatial sense, reminds of the “Internet” already naming its intermediary status, as an “in between” in the core sense of the technical medium as channel of transmission – the Aristotelean to metaxy.

The media-archaeological anticipation of the possible breakdown of the Internet, as futurum exactum, reminds of its very beginning (arché), since it started with an erroneous transmission in the first text communication ever sent over the data lines of ARPANET, between the host computers at the University of California in Los Angeles, and the Stanford Research Institute on October 29, 1969. The medium itself has been the message, in the sense of an excess of technológos, since the transmission itself was literally to log in. “They succeeded in transmitting the ’l’ and the ’o’ and the system crashed!”[5] To bring the operation in being, it required a full “login” an hour later, as has been appropriately recorded in the UCLA IMP Log as “talk” (Ibid.).

Media archaeology is accustomed to the obsolescence of pre-Internet media systems like global telegraphy, or analogue radio and television broadcasting. “Radio”, on the other hand, sublimely survived – not as a public broadcast format for radio and television programs, but as electromagnetic infrastructure for wireless data transmission (e. g. W-LAN, and mobile communication devices).

The breakdown of the Web (the Empire, in the sense of Hardt–Negri) might be compared with the fall of the Roman Empire which basically was a collapse of its logistical infrastructure: military roads, and the postal system.[6] The very Latin term imperium does not refer to a territory, but to a logistical extension: how far the power of commandment by the heads of state extends. The technical infrastructure, therefore, is not simply the instrumental precondition of an empire, but infrastructure is empire. Such kind of extensions have either a spatial (in the geographical sense), or a temporal (tradition) “bias”, as it has been explained in detail, for several successive cultural regimes in occidental and oriental history, by the forefather of McLuhan’s Media Studies, Harold Innis.[7] While Innis’ analysis stopped with the broadcast media of his day (radio, extended to television by McLuhan) – a system which has been (topo-)logically (if not electrophysically) been replaced by the (“Inter”)net paradigm. It is this topology – the “Carthage option”[8] as an alternative to the imperial territory – which links the Empire to the World Wide Web. Media archaeology learns from the proper discipline of archaeology here, studying what remains after an empire has collapsed. In a literal understanding of technology (rather than simply “technique”), this refers to the material (“monumental” hardware), and the symbolical (“code”) regime; the World Wide Web, after all, has been first of all a function of its Internet protocol (”http”). The Internet itself, though, came out as Paul Baran’s de-centralizing of electronic communication chains against the thread of a deadly attack on the former centre of control. Will such an infrastructure, in parts, still endure, or prefigure, and structure, successive territories – just like the road system of the Roman Empire prefigured future motorways in Italy, or the alphabetic code of ancient Greek and Roman knowledge, through tiny channels of tradition (medieval monasteries), survived the “dark ages” until its literal “renaissance”? Will hardware become isolated monuments, when the circuitry of its interconnections has been ruined, or will the cables simply be redefined, such as the early ARPANET did not disseminate an independent grid of cables between computer centres, but used the “analogue” telephone lines for “digital” data transmission (the TELNET)? Will the ”Web” gently transform into another technological being, such as the declaration of an autonomous “sober net” in Russia (November 2019)? Will a declaration of independence be restricted to the symbolical order of transfer protocols and IP addresses, or extend to the electrophysics of the cable grid?[9] And concerning its event temporality: Will the Internet slowly evolve and transform into something else, or be dis-continued abruptly, by external factors like a) a breakdown of electric energy supply, b) a shortage of material resources (“rare earths”), or c) a hacking of its logistical data protocols (the “code”)?

“Historical” media archaeology is an exercise in futurum exactum. To look at the present (media) condition with the eyes of a future archaeologist has a long tradition in occidental aesthetics of cultural time already, such as the “ruin fantasies” in the Classic and Romantic painting and gardening tradition. In the late eighteenth century, a painting by Panini envisioned the Musée du Louvre already as a future ruin, and the architect Sir John Soane’s Museum in London, in the early nineteenth century, has been actually designed with respect to its aesthetics as futurum exactum (as declared in Soane’s manuscript Crude Hints Towards a History of my House[10]), musing about the confusion his collection will arouse to future archaeologists – like Albert Speer’s ”ruin theory” for the architectural appearance after the end of the ”1000 years Reich”.[11] But the rigid media-archaeological caution, at that moment, is to resist the allure of allegorizing media systems, in favour of its infrastructural grounding as technology.

The challenges of long-term preservation of Internet art has been an issue in the archival, curatorial and museum field already[12] – including the necessity of a repository like GitHub for preserving the source code behind all the software which is involved.[13] But the anticipation of “The Dead Web” goes beyond. In the Ludwig Museum and MOLIOR exhibition project[14], this imagination is immediately coupled to the temporal rhetoric of ”the end”. Il senso della fine, though, means not only finitude, but fulfilment, and post-historical endurance, as well (in Hegel’s sense of ”the end of art”). Will the end of the Web be a sudden break-down, a traumatic irruption of the real by an electronic bombing, as catastrophe like the end of antiquity, or a subtle transformation like early modernity against the late Medieval Age?

What will survive from the Web, and in what form? The technologies of tradition split into the material real (hardware), and the symbolic order (code), that is: “a space-time henceforth to be shared between digital and physical realities” (MOLIOR ibid.). The physical layer at the base of the OSI model knows “no software”[15] at all.

Foucault‘s prophecy, articulated in the final paragraph of his archaeology of human thought, may recur from within Internet technology itself. Like man, the Internet is „an invention of recent date“ as well. „And one perhaps nearing its end. If those arrangements were to disappear as they appeared, if some event of which we can at the moment do no more than sense the possibility – without knowing either what its form will be or what it promises – were to cause them to crumble, as the ground of Classical thought did, at the end of the eighteenth century, then one can certainly wager that man would be erased, like a face drawn in sand at the edge of the sea“[16] – like from silicon, which is literally the material basis of the Internet.

[2] For an early discussion of that challenge, see Jean-François Lyotard, The Postmodern Condition. A Report on Knowledge [*Paris (Minuit) 1979], Minneapolis (Univ. of Minnesota Pr.) 1984

[3] As indicated in the subtitle “The Dead Web” of the MAPS 2020 conference (and exhibition) on Media Art Preservation at the Ludwig Museum – Museum of Contemporary Art in Budapest, February 13–14, 2020

[15] Friedrich A. Kittler, There is No Software, in: idem, Literature, Media, Information Systems, edited and introduced by John Johnston, Amsterdam (Overseas Publishers Association) 1997, 147–155.